I made a quick cover here and hit 1600 words today, still some daylight left……

I also wrote the intro below, its rough. …. what are you working on? 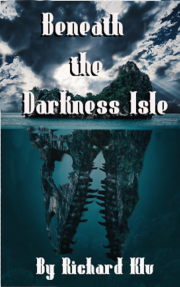 Mary Settly looked to have been strangled in her living room on October 25th. She was found by her daughter Linda on the 26th. Linda reported the murder to offshore authorities in Red Barrow Massachusetts, at 5 am. Red Barrow was a little town near Rockport that had jurisdiction over the Sunrise Isles which were themselves nearly an hour boat ride off the coast.

The island chain was small and was only home to around fifty people with no police or fire departments. They had a small doctors office that doubled as a hospital and mortuary when needed. Because of the islands distance and remoteness officers generally visited the town once a month from Red Barrow. The crime rate had been so low in recent years than the department had questioned whether it was even worth sending anyone out there anymore.

Typically Michael Fletcher, a beat cop with a passion for boating, would make the trip out but he was having his gallbladder removed and this case was beyond his skill set.

Lucas Long, Luke for short, drew the short straw that afternoon in Red Barrow and was elected to head out to The Sunrise Isle and investigate the reported murder. So, after a few hours of calling around, he located a boat willing to fairy him out there and now sat in the cab of a small boat rocking back and forth on the waves of the Atlantic.

The air was wet and smooth. The cold of October stifled the smell of fish and salt that Lucas generally detested during boat trips. There were quarter-sized snowflakes falling around the boat and in Red Barrow. It was unusual for snow this early in the year but not wholly unheard of. The flakes were lofty, the size of quarters, and the wind was light enough for them to almost hang in place while the boat plowed through them.

The size of the flakes and the wide gaps between them reminded Lucas of seeing Mount Saint Helens explode as a boy when his family lived in the Western United States. For such a calamity it was a happy memory, sitting on the porch and watching the smoke rise. He only really saw the ash flakes on television.

The boat’s owner, Fredrick Wilson, was grumbling about the weather and the cold. He drank from his thermos and wiped what coffee had soaked into his mustache away. Frederick was a bulky man who stretched himself and shifted constantly in his chair. Some people get that way around cops.

The boat’s radio started making a static sound like someone was trying to send a message over the same frequency. Frederick picked up the microphone and waiting to respond. He had a nervous look on his red face. He leaned the microphone away from Lucas then set it down. Then there was only the hum of the engine and the beat of the ocean waves against the smooth hull of the white boat.

Lucas checked his watch for the nineteenth time, it was nearly 8 pm and the sun was nearly out of sight.

“Lookin at the time won’t make it go faster ya know,” Frederick said in his raspy smoker’s voice, “Just us and the waves out here.”

“Are you heading back in the dark of staying overnight with me?”

Frederick huffed, “Our deal was that I’d come back when you called me. The wife wouldn’t like me spending the night out here on an island full of lonely women.”

“Yeah, all the men on the island are off working the fishing boats most of the time, only in port a few days of the week. From what the last guy I brought out here said at least,” he chuckled, “The guy told me that the women get so lonely they get boyfriends online and ask them to visit. Can’t imagine how bad of a connection they have out here.”

“Yeah, it’s amazing what we can do these days.”

“Any sights I should stop to see when I get there?”

“Nothing I’ve ever heard of. I don’t walk the island I just go past it or drop folks off and turn around.”

“You make a good living just fairing people back and forth?”

“Gosh no. But it’s good money for few hours of work.”

“Oh, maybe another ten minutes. You can see it if you squint at the moon. It’s rising right behind it there,” he pointed forward at the sunset, “The main island is all you’ll see till were closer. It’s like a big hill or a tiny mountain.

Beyond the dancing white flakes, across the rolling sea, the moon rose full at the edge of the world. The skies above were pink and purple, fading into deep blue. In some sparse dark and cloudless areas, early stars could even be seen.

Lucas could hardly make out the triangular lump in the growing darkness that the moon brought. It was strange how something so bright and full on the horizon could be the signal of the coming darkness. He’d heard of the small island in passing from Officer Fletcher.

When he interacted with the citizens most of them were nice and welcoming. However, there were times when he’d visit and find half the town empty. Generally, he walked the town, the surrounding island, and then he ate lunch and headed back to the mainland. On some occasions, he noted that people were watching him. Once he thought he was being followed but that was discounted as paranoia. He always noted that the town felt weird but that might have just been because of its size.

All at once the snow fell away and the air seemed to warm. Lucas was surprised by the sudden change. His hands were so cold they nearly shook before and now they were warm outside his pockets.

“You feel that?” asked Frederick. He had a big smile now that bent his beard up to his hears and hid most of his mouth.

“Warmer?” Lucas asked looking behind them and seeing the snow was still coming down.

“Funny weather around the island,” Fredrick pointed starboard, then to port, and showed Lucas the darker clouds that lurked in the distance around the island. In the dark, they were black clouds hanging above far off snowfall. Around the island, there was nothing for at least a mile in all directions.

“There’s some kind of an air current that comes up from the Caribbean and all that hot air gets locked up here offshore. Keeps them from getting more than a light dusting of snow. Makes it so little boats like mine can get out here year round.”

“I’m surprised this hasn’t been turned into a tourist destination yet,” from all that Lucas had heard, the island was beautiful. If it didn’t get freezing in winter it would make for a good weekend getaway. That’d be cheaper and faster than traveling south every winter.

“I don’t think most people even know it’s out here. From what I’ve heard, from travelers, the Islanders didn’t even know they were American Citizens until 1950 when a tax collector showed up.”

The black triangular figure that was the island was getting closer now. Its face was speckled with small dots so that from afar it almost looked like a reflection of the sky above. If Lucas hadn’t know where to look he might have missed the island.

Lucas checked the time again, it hadn’t changed much, “You’ll be okay getting back in the dark?”

“Oh yeah. It’s not a long ride, plenty of gas and the GPS will do all the thinking for me.”

Lucas adjusted his coat to let some heat out and cool off. In doing so he revealed his gun. Frederick spotted the weapon and allowed his eyes to linger on it. Lucas covered it with this overcoat. It’s strange how people tend to stare at guns. A weapons presence always seems to make a situation somehow tenser.

There was a dim light at the end of the dock that hardly made it possible to see. The night air wasn’t as cold anymore but Lucas could still see the mist of his breath. It felt like it took Fredrick another hour just to line the boat up well enough for Lucas to get onto the dock. When Lucas did step up onto the dock he nearly fell into the ocean. Speckles of water fell from the sky starting a slow rainfall.

Lucas turned back to Fredric, “Out of the snow and into the rain,” he jested, “Do you know where I can find anyone at this time of night? I don’t see any buildings from here.”

“Towns up the hill. Not sure what else to tell you friend. Are they expecting you?”

Fredric nodded and turned away from Lucas and then revved the engine to move the boat away.

Lucas began his way across the creaky dock up to the muddy shore. A light wind brushed the waves which lightly beat the shore spitting salty moisture into the air. The scent of fish and moisture filled Lucas’s nostrils. In the warmth of the island the air had a different, salty, taste. At the end of the dock Lucas stopped and looked down at the enormous puddle that had accumulated in a divot at the end of the dock. His overcoat was already wet from the journey to the island and now his path set him to go through puddles of mud. What luck I do have.